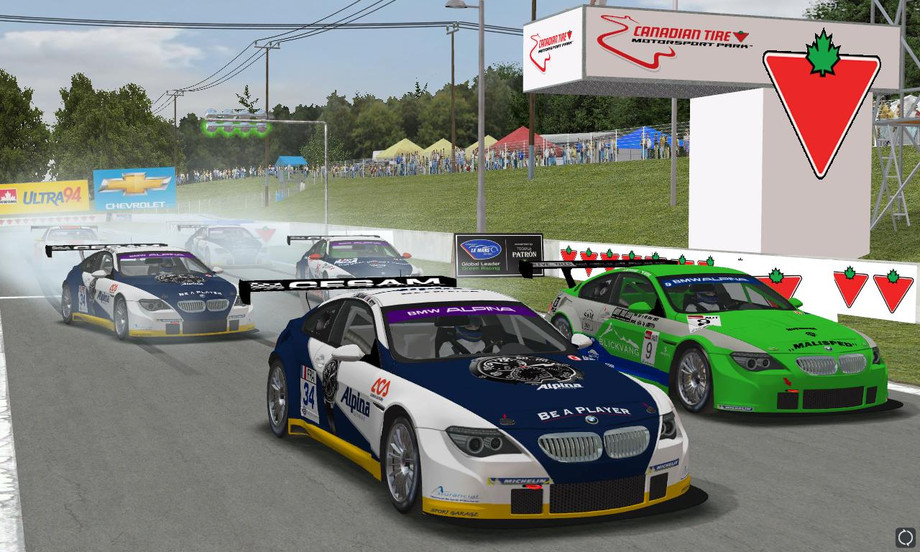 11 Jul 2016 — Martin Buchan started on the pole and led every lap on the way to a commanding victory in the Moonshine BMW Weekend @ Mosport 2012 GT3 in Round 3 of the Moonshine Racing Mosport Weekend Challenge series.

Buchan spent all of 23 laps total leading André Gomes after being engaged by him on the first lap. Buchan controlled the race lead every lap from green flag to victory.

Buchan is seventh in the standings for the series. He has one start and led 35 of his 35 laps raced while taking the win once.

Moonshine Racing Mosport Weekend Challenge series moves on to Round 4 in two weeks at Mosport 2012. The series has 16 drivers competing for points in the championship.

Driving the BMW Alpina B6, Gomes traded positions with Juan M Bento in a long and tense battle for second from the middle stages, running within a scuff of each other over a stretch of 35 laps. Gomes drove nearly equal parts leading M Bento after being caught by him on the first lap. After losing the spot on lap 10, Gomes got around M Bento and into second place on lap 22, and defended it against pressure by M Bento another 13 laps toward the checkered flag.

Gomes remains in the lead of the standings, increasing the lead over rival Porfirio Dias Santos to 14 points. Gomes has three starts and led 30 of his 100 laps while taking the win once.

Driving the BMW Alpina B6, M Bento mixed it up with André Gomes in a lengthy and determined battle for second from the middle stages, running within car lengths of each other over a range of 34 laps. M Bento spent the majority pursuing Gomes after targeting him on the first lap. In the end M Bento settled into third the 13 laps running to the checkered flag.

M Bento moves up to fourth in the standings, 20 points behind Arjen Weidman. M Bento has two starts and finished as high as third.

©2008 - 2020 Atlantic Motorsport-Trademarks and brands are property of their respective owners.

Personal data provided by the contact form are collected only to contact you and answer your questions.

We use cookies to offer you a better browsing experience, analyze site traffic, personalize content, and serve targeted advertisements. Read about how we use cookies and how you can control them by clicking "Read more". If you click on "Accept" to continue to use this site, you consent to our use of cookies
Accept